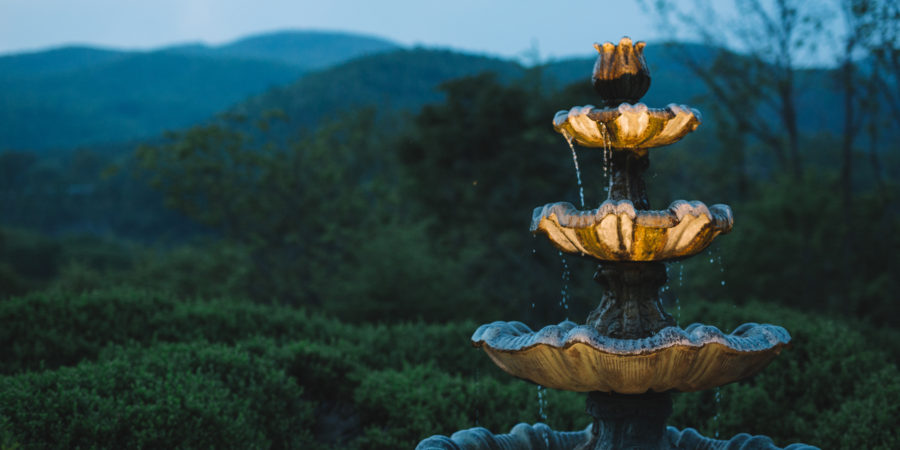 I’ve already decided that I am going to keep taking steps forward, even if they are hard, even if I don’t want to take them. But sometimes not being able to see where the path is headed can be discouraging when these kind of low-visibility conditions seem to last for a while.

During a time like this it’s all too easy to let my mind think on the what if’s and things that don’t help me to be at peace. I’m thankful that the Lord is pointing these things out to me.

I just remembered a time a few years ago, I went for sunset photos with a friend just for fun and we ended up staying at the top of the mountain for longer than we should have, before we knew it the path heading back down was completely dark. All we had was the flashlights on our cell phones and my battery was almost dead. We were way up in the mountains. Jason wasn’t there. Not very good phone signal. There wasn’t anyone else around that we knew of. While heading back on the path, all we could see was the next step forward. It was completely dark and I couldn’t see what could be around us there in the woods.

All we could see was the little spot of light right before us as we took each step.

My imagination was running wild. I could hear all kinds of sounds in the woods. All I could think of was “getting attacked by a bear or mountain lion or wolf or crazy mountain person, we’d end up on the news. No no no no. Stop thinking that! Just focus on following the light and taking the steps to getting back to the car! One step at a time.” I was trying not to get myself into a panic. This was not typically the kind of situation I would get myself into. Adventure wasn’t my thing. At least not that kind! Not only was this adventure but not a very wise kind of adventure. Haha

Well, we finally made it back to the car. I was so relieved.

But I remember while taking those steps toward where I was going, they were really hard, they were scary to take, it was easy to let my imagination run wild and think on things that didn’t help me in taking my steps forward. But what were my options? Stop and sit down in the trail and give up because I didn’t like it? Not an option!

The time of hiking in the dark with a flashlight that could go at any second felt like it went on forever. I was like, “Lord, is this ever going to end?” But we ultimately made it out of the woods and back home.

All of this being said, yesterday morning was hard. I was at a point with the Lord where I was just like, “Lord, just give me a glimpse or something? What is going on? Where are you taking me?” Well a little later in the day the Lord showed me some things, and through those things, I knew He was speaking so directly to me, and it encouraged me and gave me a renewed hope, a refreshing that I needed. He reminded me that He is working behind the scenes, things unseen. I love to think of Him while He’s working behind the scenes, knowing the things He knows and knowing how good He is, how faithful. He prepares the way for us. It’s a good way.

I love when He does that.

Update: I just discovered that Eugene Peterson passed away. I never really knew of him, but he wrote the translation of The Message version and a book that I only just discovered today called, “Long Obedience in the Same Direction: Discipleship in an Instant Society” (yea, I think I’m going to need to read it)

I love this quote from him,

“Perseverance does not mean “perfection.” It means we do not quit when we find that we are not yet mature and there is a long journey still before us.”