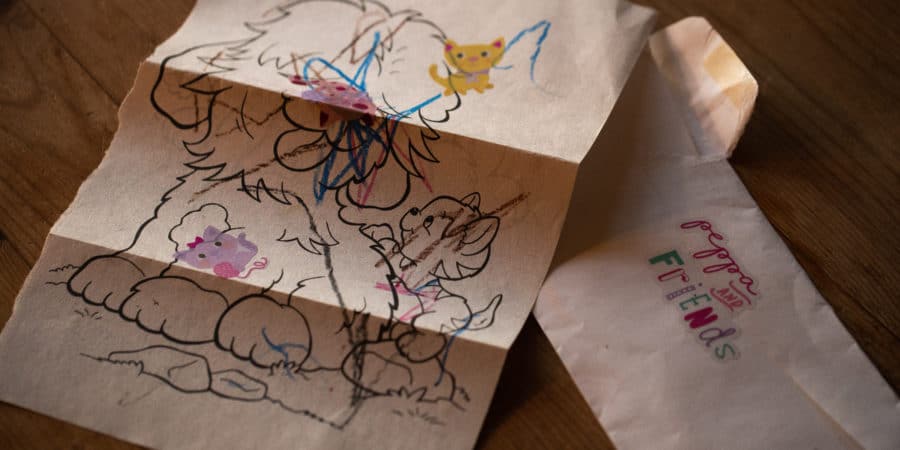 We received a surprise letter in the mail from a mysterious sender –I opened it up and it was a picture from a very special little one. ?

It instantly reminded me of when I was a kid, when I had in my heart to draw something very special for someone… how excited I was as I scribbled colors and chose stickers to place in random places. Sometimes there would be words, but I was probably too young to write them so that anyone could read what the words actually said….

You see, there wasn’t anything really incredible or amazing about what I made, it wasn’t perfection, and usually the coloring was way outside the lines. But my heart behind it made it mean something to the person it was created for.

…and then I was reminded of our Heavenly Father ?

How we are just like little children with the things we do. How we often strive for perfection many times, but we’re really coloring outside the lines and scribbling at best. haha

Isn’t that beautiful, and so comforting? ?

And isn’t it good to know that He can use our “imperfect attempts” to bless others just the same? He can use whatever we “do” when we do it from the heart and when we ask Him to be a part of the things we do.

I don’t feel like I’m any kind of writer at all, I see all of the flaws compared to the things I see other people write. ?But I have to remember that it doesn’t matter –if the Lord leads me to write something, then I am to write it, and if I just obey and ask Him to help me as I do what He asks me to do, then He will take it from there and make it beautiful. ?He will make it usable for whatever He wants to use it for.

Thank You, Father, for seeing through all of our imperfections and flaws, and our silly attempts at perfection… You only see through all of that and right into our heart’s intentions.

He doesn’t care if our sincere attempt is a skilled “work of art”, or “one little scribble”…. it warms His heart just the same, and He hangs it up on His wall to remember, because it means something to Him, that we thought of Him, that our hearts were turned toward Him.

“…For the Lord does not see as man sees; for man looks at the outward appearance, but the Lord looks at the heart.” – 1 Samuel 16:7