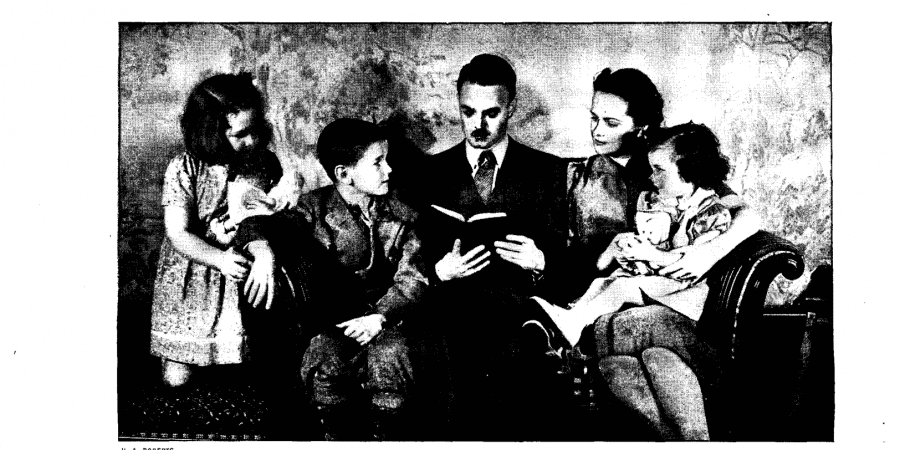 And that’s about all we can say about the situation, in that moment.

This morning I clicked on an “untitled draft” here on my blog site, and I came across this old reading that I had pasted into this “untitled draft” from an old book that we have called, “Bible Readings for the Home” an edition from 1948. I believe it was one Jason picked up from a thrift store because it was old and looked cool. I honestly had never really dug into it before now…

“Bible Readings for the Home”

And isn’t that rather fitting for this time? ?

Here is the passage I had pasted into this draft, I believe it was sometime in January or February…

And put your armor on;

Fight, for the battle will be ours;

We fight to win a crown.

We fight not against flesh,

We wrestle not with blood;

But principalities and powers,

So I went and found this book on the bookshelf this morning to see if I could find where I pulled this quote passage from, and instead I turned straight to this page…

It’s a little hard to see this scan, but the picture says,

“NATION SHALL RISE AGAINST NATION, AND KINGDOM AGAINST KINGDOM: AND THERE SHALL BE FAMINES AND PESTILENCES, AND EARTHQUAKES, IN DIVERS PLACES.”

Below the picture it says,

“When ye see these things come to pass, know ye that the kingdom of God is nigh at hand.” —Luke 21:31

But if we continue in Matthew 24, going into verse 8…

“All these are but the beginning of the birth pains.”

And I mean, who feels warm and fuzzy at that verse? I sure don’t. And yet…. Jesus commands us not to be afraid, and not to fear.

“Let not your hearts be troubled. Believe in God; believe also in me.” —John 14:1

He warns us of this time, He prepares us for this time, and He has made a way for us, in this time.

“So you also must be ready, because the Son of Man will come at an hour when you do not expect him.” (Matthew 24:44)

We can trust Him just as much in this time, as we can in any other time. Don’t you think there is a good reason He commands us “not to fear”?

“Do not be anxious about anything, but in everything by prayer and supplication with thanksgiving let your requests be made known to God. And the peace of God, which surpasses all understanding, will guard your hearts and your minds in Christ Jesus.” —Philippians 4:6-7

This “peace that surpasses all understanding” is a promise of God. ?

There was a time in my life, when I could hardly stand to read about the last days. It so troubled me, the fear that I had within me was so worrisome and obsessed and panicky about it all…

But God alerts us to so lovingly prepare us.

He tells us about all of this beforehand so that we’ll know what’s going on, so that we’re not caught off guard.

He tells us about all of this so that we can make sure that we are “wide awake” and that we are “looking to see”…. Him.

But most of all, I believe He tells us about these things so that we can make sure that we’re ready and right with Him, and not only that, but that we’ve allowed Him to do the transformative work within us so that we can stand strong in these kinds of times.

Don’t you think that if you are living in this time, that you were created for this time?

Did I think I would be writing about any of this, this morning? No!

I have this feeling that God is reminding me this morning that we’re in the “birth pains” stage…. that we’re being “alerted” to “awakening” because of His great love for us, because of His mercy, and I believe so wholeheartedly in an end time revival and awakening because He says His glory will come to the earth!

“Yet as surely as I live and as surely as the whole earth is filled with the glory of the LORD,” —Numbers 14:21

“All the ends of the earth will remember and turn to the LORD. All the families of the nations will bow down before Him.” —Psalm 22:27

“No longer will each man teach his neighbor or his brother, saying, ‘Know the LORD,’ because they will all know Me, from the least of them to the greatest, declares the LORD. For I will forgive their iniquities and will remember their sins no more.” —Jeremiah 31:34

I believe those days are not so far away. He’s “waking us up” to prepare us for this great day.

When someone wakes you up from sleep, do they often have to shake you a little bit in order to wake you?

I believe that’s what God is doing in the earth right now. He’s “shaking us” to “awaken us”…

Thank You Father, I trust You in these days. Help me to stand firm, wholeheartedly –I can trust that You will give me everything that I need to be able to live courageously in this day.