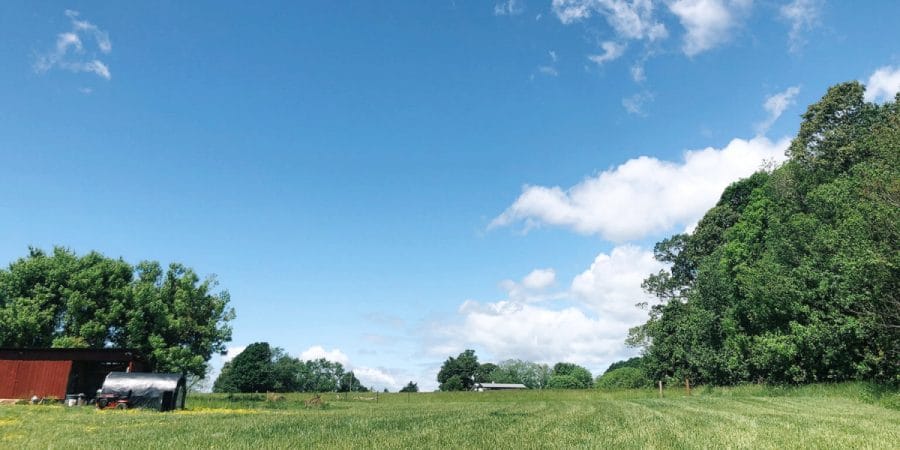 Well, yesterday was an interesting day “on the farm”… 🥺

You may or may not know this, but we’ve been raising turkeys over the last few weeks.

(I had no IDEA how much personality a turkey has! These that we’re raising are just the sweetest, and they LOVE people. They go running to people because they’re just that friendly.)

Jason and I have grown pretty attached to them, and we really enjoy raising them. What started out as an idea for raising them for Thanksgiving dinner, has quickly turned into raising them as “feathered friends” to raise more to sell.

That being said, I just about lost all of our turkeys yesterday.

I looked outside and they were ALL in the road. 😱

So I ran out there as fast as I could with a bag of meal worms, but they wouldn’t come back to me, almost like they were froze.

As I was trying to get them to come back, and our neighbor was trying to help me get all 9 of them back to our side of the road, a truck came flying through and plowed right into the turkeys, and just kept going like it was no big deal…

I don’t know how more weren’t harmed, but only one was hit.

She didn’t die instantly, and it was heartbreaking because the rest of the turkeys didn’t want to leave her side, but thankfully the neighbor helped me to put her out of her misery, so I didn’t have to do it.

She was all messed up, and flailing about, and suffering.

It all just completely broke my heart…

You know, living with all of our animals over the last few years, I’ve learned that things happen—we’ve lost a few… but I have to say that this situation felt much, much different, and it hit me much deeper.

All of this served as a reminder of the current condition of our world, and the condition of many hearts—and it hit way too close to home.

Things like this happen to “animals on the farm”… but how a person can just plow right through a bunch of turkeys in the road, while seeing two people trying to get them out of the road, and “keep on keeping on” was just beyond me.

Something about this hit me much, much deeper than just losing an animal naturally, or by a predator.

But I was also reminded of when all of our photography gear was stolen out of our hotel room while we were in Charleston, as wedding photographers, a few years ago—leaving us with “nothing” for the wedding we were to shoot early that next morning. In all of that, there was a lesson for us… and I’ll never forget the importance of that lesson.

It was a lesson in forgiveness and letting go, especially when it would be so easy to seek revenge or to be bitter and angry. We could have easily sought that person out, we even found their address and their contact info on eBay when we found our actual gear listed for sale.

In all of that, we were presented with a choice to make, two paths… and we chose the path of forgiveness and moving on.

The beautiful effects that came of that decision—I will never forget. ☀️

There is just something amazing that God can do when we choose to forgive. 💖

And so… that being said… as I was walking back from putting all of our animals up for the night, I decided to forgive whoever this was and let it all go. It’s really amazing what that does in our hearts.

Also, another lesson/reminder is this…

God has a way of placing people in our paths who are there to help us when we need it, and I’m EXTREMELY thankful for our neighbor, who went WAY out of his way to help me, and he put the turkey out of her misery so I didn’t have to do it, and he made sure that I was able to get every last one put up into the coop before he left.

And I’m so grateful for that. 💝

We can be a light in this dark world. ☀️

And there are so many who are.

Just look for the “light” ☀️