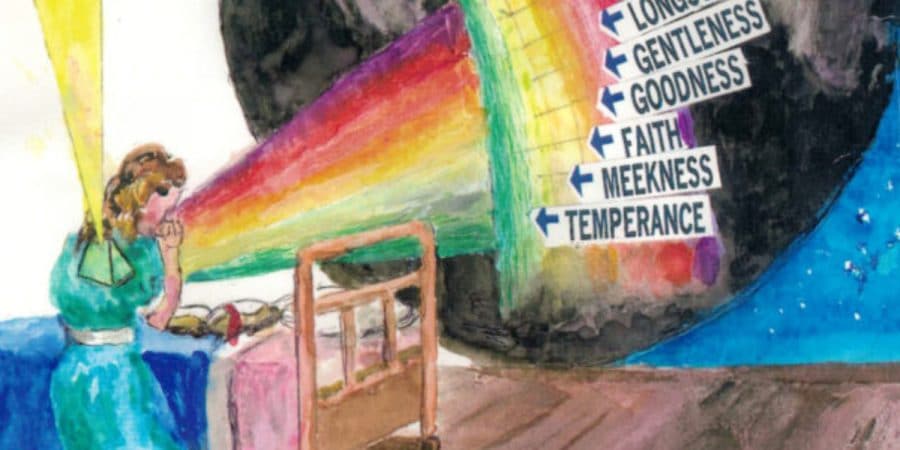 I’ve written about this before, but it’s on my heart again this morning…

I used to be spooky-afraid of God.

And the “Holy Spirit”… well, I didn’t think much about Him—I tried not to.

And if I did, I was only spooked at the thought of Him being near.

But I didn’t know Him.

It was an awful, awful, kind of torment.

I was saved, and I was living the “christian lifestyle”…but I was tormented by this perspective I was stuck in—this unhealthy fear of God, this incorrect perspective of God.

I thought I knew Him, but I didn’t really know Him.

Honestly, it was embarrassing, and so I didn’t really talk to anybody about it. I felt ashamed.

But every now and then, when it bothered me, I would cry out to God for help.

And at the time… it seemed nearly impossible for me to have any kind of healthy, REAL relationship with my Heavenly Father, because I was so afraid and uncomfortable about Him seeing me or being with me.

I went through this for many years, and the agony of it seemed to worsen for a season…

“God… this isn’t going to work trying to live through my life like this. I can’t take this.

But I don’t know how to get from ‘here’…

to the place I need to be… where I can SEE YOU, in the way I was created to.”

Things were rapidly changing in my life.

I began discovering the truth about God as my Heavenly Father, I was learning about who the Holy Spirit really is, and who He is to me.

After some unexpected, but so necessary prayer, with some practical instruction on what I was to do about this fear that was beginning to turn into panic attacks in the night, I hit “fear” head-on when it came at me while I was alone the next day…

…and felt something literally lift off of me, and go away.

Yes, I FELT that victory. 🎊

…I began having the most beautiful dreams. ✨

For whatever reason, as I remembered them, I felt the need to write them down.

I never really remembered any good dreams before that time, and the ones I did have I didn’t want to remember.

Most of the dreams and experiences that I’ve had over the years were very dark and scary, I would often be paralyzed between waking and sleeping, and it felt like someone scary was holding me down, or I would half-wake up and think I was REALLY seeing a huge spider walking down a ladder toward me in my bed… things like that. Many of the dreams were far worse, and I won’t share those on here.

So you see, the “night season” was not a “good thing” for me—from the time I was a young child, all the way up until my adulthood.

In fact, I dreaded it, I hated it. I wanted to shut it down.

I just wanted to be able to sleep, and not be afraid or have these dark, scary experiences or see these terrifying scenes in my mind in the night.

I began having “dreams” or really… “encounters” with the Holy Spirit in the night.

It was like the Lord knew that He would be able to reach me, and change me, shift my perspective when my crazy, fearful mind wasn’t operating…

And I began to have communion with the Holy Spirit in the night season.

I would wake up, and realize… with a sort of “memory” of Him hovering over me in my sleep.

And it was beautiful,

and it was peaceful,

and it was so beyond wonderful to be in His presence—not scary or spooky.

He was clearing it all up. 💖

And that’s when things REALLY started changing in my perspective towards Him.

I began truly DESIRING to know the Holy Spirit, and I felt as though I now “had it in me”… to dare to seek Him and to get to know Him. 💖

As far as I’m concerned… that was a miracle in my life. 🎊

And now I cannot tell you how excited I am to go to sleep, and to get to discover what He might want to share with me in the night season…through my dreams, and through encounters with Him in the night.

and what God can do through dreams is REAL.

I’m so thankful that He reached me through the night season,

and He drew me close.

In those dream encounters that I had with the Holy Spirit, it felt like He literally surrounded me, I felt like I was in the air with Him, being surrounded by Him, for who knows how long. 💖✨

And when I woke up, I could tell that my perspective of Him had changed.

And in this “night season”… He helped me (and IS helping me) to know who He truly is.

I once was blind, but now I am learning to see. 👀💝

What was once my greatest fear, my biggest “dread”…

…is now a great joy,

and it’s a “place” where I am getting to know Him.

If you deal with any of these things, cry out to Him, He wants to help you, He wants to remove the torment so that you can SEE how wonderful He truly is, and how much He desires to have close relationship with you.

“You will not fear the terror of the night, nor the arrow that flies by day…”—Psalm 91:5