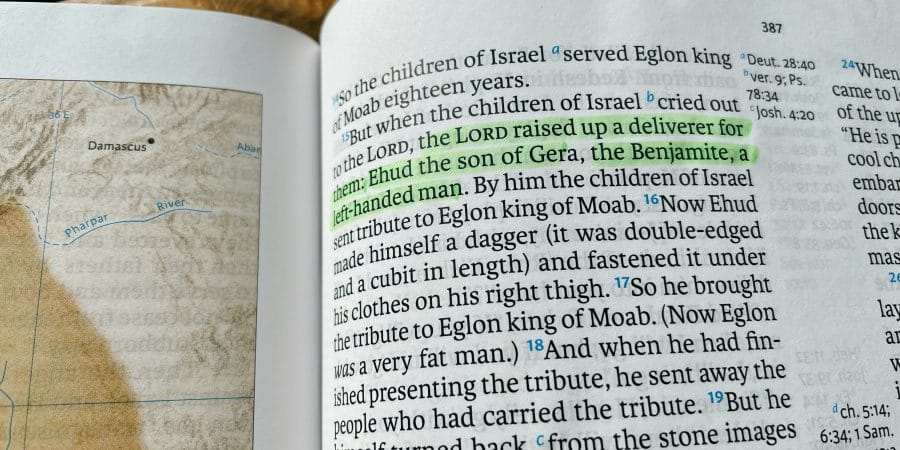 Well, the Lord led me to a rather strange bible story this morning.

And I have to admit—I don’t remember EVER being drawn to this passage before.

And so I thought,

“Now, why would that be important to note? Why did the writer point that out?”

(But I kept reading the story before I started digging into commentaries about “left-handedness” in the bible.)

As the story goes, this man, Ehud, a “left-handed man,” was raised up by God to be a deliverer for the Israelites, who—yet again, fell away from the Lord after Joshua’s generation had passed. They had gone back into captivity of the Moabites.

So Ehud made himself a dagger, and he hid it under his clothes on his right thigh, and he went to this king Eglon, the king of Moab, with this “secret message”…

Ehud reached for this dagger, which was hidden on his right thigh, using his “left hand“… and he stabbed the King,

There it is mentioned again… his “left hand”…

That seems rather “unexpected” doesn’t it?

Long story short, Ehud killed the evil king, delivered the children of Israel, and in verses 29-30 it says that

“…they killed about ten thousand men of Moab, all stout men of valor; not a man escaped. Moab was subdued that day under the hand of Israel. And the land had rest for eighty years.”

So back to the “left-handed” thing…

Apparently in that day, being “left-handed” was considered to be an “inferior” quality…

“out of the norm”

and it was possibly even seen as a “defect.”

Do you know what this means?

God decided to use an “unlikely” man

a man seen by society as “defective”

a man that society would “not prefer”

…and God used this “unlikely” man to deliver Israel, in a very “unlikely” and “unexpected” kind of way.

I LOVE that about God, don’t you?

His ways and His wisdom are so far above our ways and our wisdom.