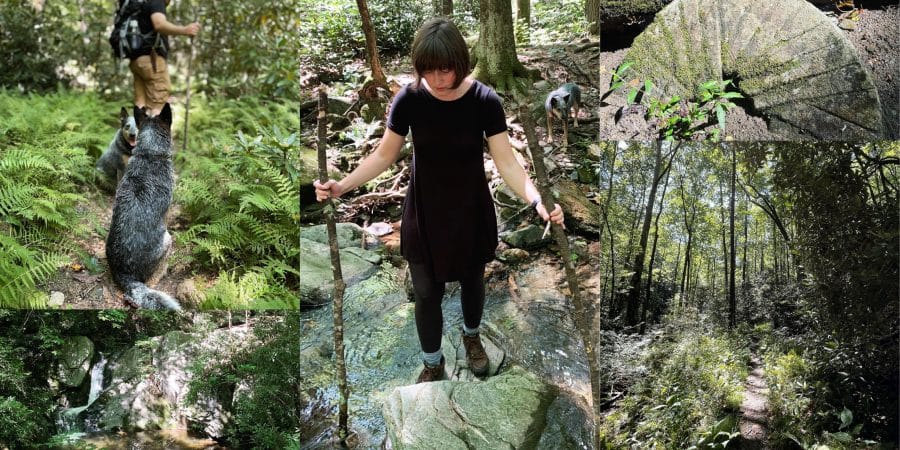 Yesterday we had an opportunity to hike to a secluded, century-old cabin for a photo assignment.

This cabin was part of a once-thriving community, and it was “one of the few structures that withstood the devastating 1916 flood.”

Only accessible by foot, the hike was around 10-11 miles—unlike any kind of hike we had ever done before!

I would say that it was quite the Appalachian experience. 🏞

It was a beautiful, secluded, primitive hike…

We crossed over and through creek waters about 16 different times…

Climbed through a secluded gorge, and up the mountain…

…only we ran into a yellow jackets nest one time

I looked down, and our dog had a yellow jacket on him, and then about that same time, Jason got stung, and then I felt a sting on my arm and on my leg… as soon as we realized what was happening we started trying to run down the path. I remember crying out for God to deliver us in that moment, and right at time, I realized we were no longer getting stung.

Oh how it could have been so much worse, especially with Jason being allergic to bees, and we weren’t at a place in the trail where it was easy to run and get away.

As we reached a place to stop and rest for a moment, I found a bee that was trapped in my shirt, still trying to sting, but it didn’t get me. 💖

I’m not gonna lie, this whole thing was hard. The trail wasn’t strenuous, necessarily, but the distance was, and the fact that we were way in the woods away from everything was a challenge. Mentally, it was a challenge for me.

I’m not naturally an “adventurous person”… I tend to want to play it “safe”… I like to know what to expect, and I like to be able to prepare.

On the way up the mountain I read some of the trail reviews—particularly about all of the Tennessee Rattle Snakes that folks have seen up there lately. Apparently they said there was a nest of them around the cabin. It’s a “snaky” time of year to hike. To be honest, I was a bit nervous about that.

It’s so easy for me to worry, if I let my thoughts go where they seem to want to go…

At one point in the hike, I started having these horrible scenerios and scenes play in my mind…

“…this could happen, and oh—what would we do if that happened…”

And as I realized these things were playing out, I began to just mentally take them straight to God.

And as I did, it’s like I could sense Him saying…

“I have already taken care of it.

…Yes, I have already taken care of that too.”

And every time I would see a picture of something “bad” that could happen to us, and I would take it straight over to Him, that was “His response.”

…and I could feel His peace.

I could feel the relief of my worry fading away, as I handed it over to Him.

And I was reminded of this verse…

“Do not be afraid or discouraged, for the LORD will personally go ahead of you. He will be with you; he will neither fail you nor abandon you.”—Deuteronomy 31:8

And this morning, I feel so thankful for the way He goes before us.

How He guards us,

He guides our steps,

and He goes before us to lead us in the way we should go.

That is why we do not need to worry or fret—He’s got us covered.